Periodically Clean Air Sciences, Inc. is called upon to perform forensic investigations to determine if nuisance or toxic contamination is present from sources such as cigarette smoke residue (environmental tobacco smoke or ETS), marijuana smoke residue, or methamphetamine residue.  Residues from drugs can have harmful effects to occupants, especially children who are much more vulnerable and typically in closer proximity to contamination if crawling or playing on impacted surfaces.  U.S. Environmental Protection Agency online literature states “children may be exposed to toxic residues that remain from ETS in dust and on surfaces inside the home for weeks or months after smoke has cleared from the air”.

There are currently no federal regulations or guideline levels for surface contamination in a residential setting, but confirmation of presence serves as a marker for by-products of cigarette smoking.

Environmental tobacco smoke (ETS), commonly referred to as secondhand smoke, is a complex mixture of gases and particles and includes smoke from burning cigarettes, cigars, and pipe tobacco (sidestream smoke), as well as exhaled mainstream smoke.32 There are at least 250 chemicals in ETS that are known to be toxic or carcinogenic, including acrolein, ammonia, benzene, carbon monoxide, formaldehyde, hydrogen cyanide, nicotine, nitrogen oxides, and sulfur dioxide.32,33 In 1992, EPA classified ETS as a known human carcinogen.34 Children can be exposed to ETS in their homes or in places where people are allowed to smoke, such as some restaurants in some locations throughout the United States.

According to the U.S. Surgeon General, there is no safe level of exposure to ETS, and breathing even a small amount can be harmful to human health.32 The Surgeon General has concluded that exposure to ETS causes sudden infant death syndrome (SIDS), acute lower respiratory infection, ear problems, and more severe asthma in children. Smoking by parents causes respiratory symptoms and slows lung growth in their children.32 Young children appear to be more susceptible to the respiratory effects of ETS than are older children.29,34,35

Exposure to ETS in the home is influenced by adult behaviors, including the decisions to smoke at home and to allow visitors to smoke inside the home. Children living in homes with smoking bans have significantly lower levels of cotinine (a biological marker of exposure to ETS) in urine than children living in homes without smoking bans.36 Household smoking bans can significantly decrease children’s exposures to ETS, but do not completely eliminate them, especially in multiunit housing where ETS from other apartments may infiltrate through seepage in walls or shared ventilation systems.37-39 Furthermore, children may be exposed to toxic residues that remain from ETS in dust and on surfaces inside the home for weeks or months after smoke has cleared from the air.6,40-43 These residues, referred to as “third-hand smoke,” may be reemitted into the gas phase or may react with other compounds to form secondary pollutants.40,43 The risk of exposure to third-hand smoke may be particularly high for infants, due to their close proximity to contaminated objects such as blankets, carpets, and floor surfaces, and their frequent hand-to-mouth activity.6

Protecting children’s health from environmental risks is fundamental to EPA’s mission. Children may be more vulnerable to environmental exposures than adults because their bodily systems are still developing; they eat more, drink more and breathe more in proportion to their body size; and their behavior can expose them more to chemicals and organisms.5 According to the Department of Justice (DOJ) Office of Justice Programs (OJP), children who live in or visit meth labs or are present during drug production face acute health and safety risks. The age-related behaviors of young children (such as frequent hand-to-mouth contact and physical contact with their environment) increase the likelihood that they will inhale, absorb or ingest toxic chemicals, drugs or contaminated food. Their physiological characteristics (such as higher metabolic and respiratory rates and a developing central nervous system) leave them particularly vulnerable to the effects of toxic chemical exposures. Exposure to drugs and alcohol before birth places infants at increased risk for neurological abnormalities and respiratory problems, which may be compounded by ongoing environmental exposures. Children may also have a special vulnerability to certain harmful materials that may be present during meth lab remediation activities, including lead, asbestos and mercury. For these reasons, special care should be taken when cleaning up a former meth lab if a child lives or will live in the residence. 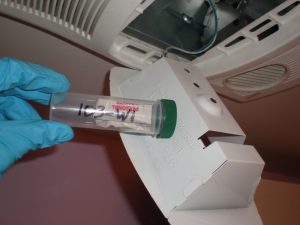 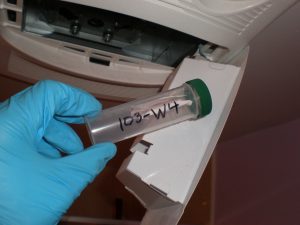 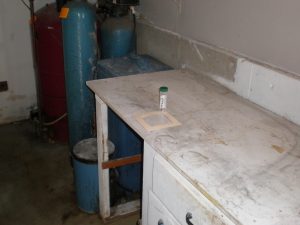