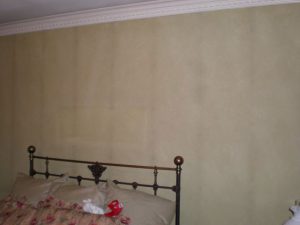 This residence had water damage in the adjoining bathroom and these “ghosting” lines appeared after repair work was performed. These lines are not from mold growth and a surface sample confirmed this, but it is typically caused by cold conductance from exterior walls through structural wall members such as wooden or galvanized steel studs to the drywall. Once the inner exposed surface of the the drywall becomes cold and below the dew point temperature condensation will occur if sufficient moisture is present which will attract airborne particles and adhere them to the surface after the moisture evaporates. Frequently the black “ghosting” lines are caused from excessive candle burning, but the material upon touch did not exhibit properties that supported that as a source. The building location is on a busy street and the black lines are suspected to be from automobile traffic on or immediately after a cold day with elevated moisture levels inside the rooms, but a forensic material analysis of the material would be necessary to confirm the true source of the debris. If you were wondering, ghosts do not cause these lines – as far as I know…. October 2017 Project.